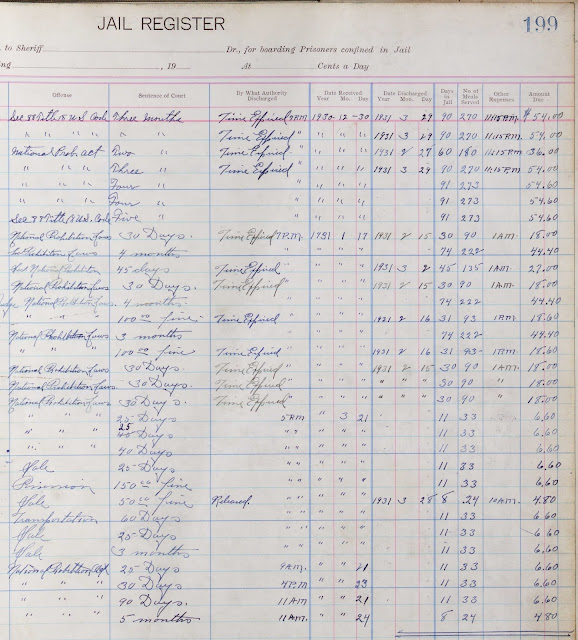 Record of the Month! Last month we featured the Student Resources page from the Licking County Records & Archives website, along with a brief research/writing guide. As a follow up, for the month of September we are taking a look at how records from the Licking County Records & Archives collections can be used to tell larger historical stories. Government records are not typically thought of as “juicy” sources of information for historical research in the same way as personal diaries, letters, etc. are, because the language often used in government forms is very tedious. However, government records can not only provide a wealth of historical detail, but also serve as a consistent source of data due to their propensity to change slowly over time. Pictured here is a sampling of entries from the Historic Jail Registers dating between 1928 and 1932. A study of the Historic Jail Registers hints to several larger events in American history. Furthermore, the registers can be u
Read more 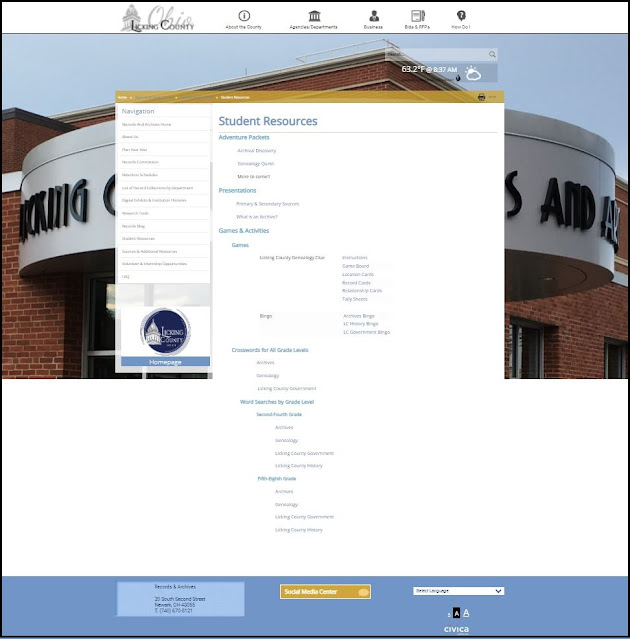 Record of the Month! For the month of August, as students reluctantly begin preparations for the upcoming school year, we have decided to feature the Student Resources page of the Licking County Records & Archives website. Also included with this post is a short research/writing guide for older students.   Student Resources The Student Resources page has activity packets, puzzles, and more that focus on archives, genealogy, government, and history. While some of the resources being offered on the Student Resources page are geared towards grade school students, other things such as the Primary & Secondary Sources presentation and Bingo cards are meant for all to enjoy! In honor of the research papers that will soon be written, we here at the Licking County Records & Archives Center offer this short research/writing guide. While this guide is geared towards older junior high and high school students, we hope it will be helpful to anyone who reads it. The very firs
Read more 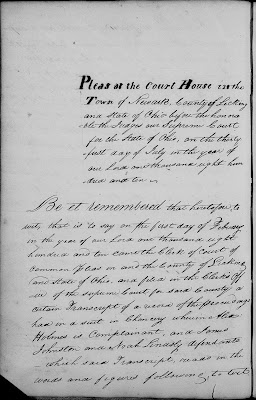 Record of the Month! On April 19, 1775, hostilities between the Empire of Great Britain and the American Colonies opened with the battles of Lexington and Concord. The hostilities were the result of the repeated tyrannical actions taken by the British Crown and Parliament in a bid to impose harsher colonial rule over the American colonies. Just over a year after hostilities had been opened, on July 4, 1776, the colonies formally articulated and declared their independence with the adoption of the Declaration of Independence, immortalizing that date as the official birthday of the United States. For the month of July, we are featuring a few different records that also share July as their birthday month. The first and oldest record displayed here is dated July 1, 1810, and is a filing record from the Supreme Court of Ohio, which is held in the Licking County Records & Archives Center. The record itself describes the Licking County Clerk of Courts filing a transcript with the
Read more

Yep, someone got arrested for... 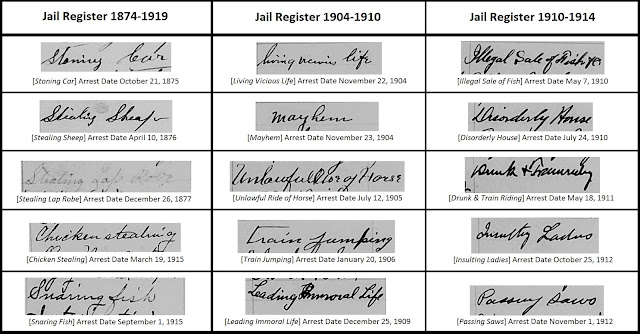 Record of the Month! For the month of June, we are featuring a variety of entries from the Historic Jail Registers. Licking County’s Historic Jail is a well-known structure throughout the county, and is considered one of the county’s most architecturally significant buildings. Constructed in 1889, the historic jail was the fourth detention facility constructed in the county. Initially the jail could accommodate sixty-eight inmates across four cell blocks. Designed by Ohio architect Joseph Warren Yost in the Richardsonian Romanesque Revival style, the jail’s overall appearance is that of a castle fortress. Yost also included several intricate details, such as carvings of cat-like creatures into the windowsills and a frog water spout.   The iconic structure served as the county’s primary detention facility until 1987. The jail registers track who was arrested and booked into jail, regardless of whether or not charges were formally filed through the court. The information includes
Read more

A Shorthand History of Penmanship

Record of the Month! For the month of May, we are featuring a wide assortment of records from 1812-1929 that showcases the variety of hands they were written in. The ability to express oneself in writing has been a long-developing skill in our species for thousands of years. The earliest known written records can be traced back approximately to the end of 4 th Millennium BCE to the city of Uruk, written in Sumerian pictographic representations and cuneiform script. As languages have developed, evolved, and gone extinct across the world, so too have the writing systems that express them. Throughout the 18 th and 19 th Centuries students were taught penmanship (writing) by copying different writing styles known as “hands” in a copybook, which contained the alphabet and several phrases. Due to the cost of quills, paper, and ink, penmanship was reserved for the wealthy upper classes (usually white males) and those whose professions required it (clerks, merchants, businessmen, etc
Read more

Hints to the Stormy Past 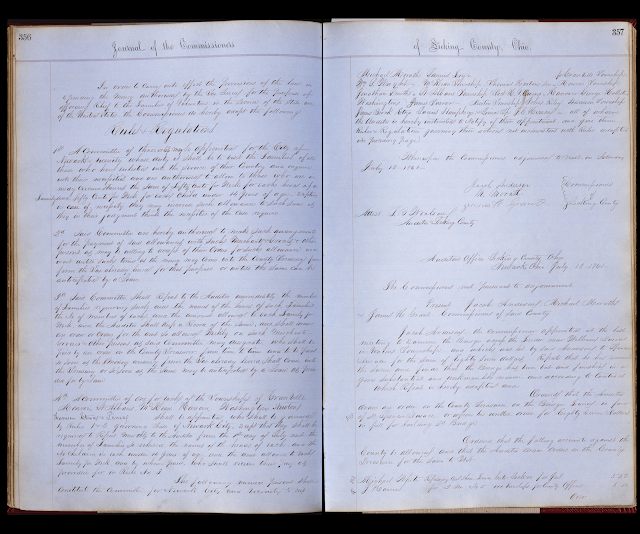 Record of the Month! April is a busy month, with well over fifty nationally recognized movements, industries, heritages, and histories observed on a daily and weekly basis, as well as all month long. Additionally, April is filled with the anniversaries of several positive and negative historical events, including the first presidential assassination in American history, as well as the beginning and end of the American Civil War. While little mention of these events is made in the Commissioners’ Journals, there are a couple of entries that allude to the fiery trial facing the United States at the time.    The American Civil War started in the early hours of April 12, 1861 when traitors attacked Fort Sumter in Charleston Harbor, South Carolina. The Fort’s commander, Union Major Robert Anderson agreed to surrender on April 13, 1861 and evacuated the following day. Despite the nearly 34 hour bombardment, no casualties are recorded for either side. Fort Sumter is often noted by histor
Read more 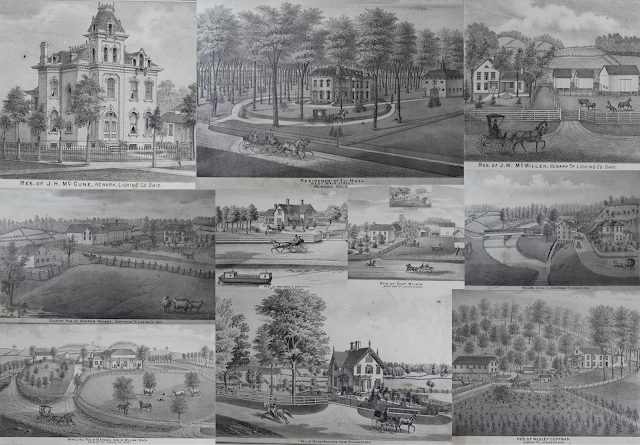 Record of the Month! For the month of March, we are featuring our new house history research guide: Introduction to Historical House Research . The guide can be found under the Research Tools page of the Licking County Records & Archives webpage  or a paper copy can be accessed in the Records & Archives Center Reference Room. Introduction to Historical House Research It is natural to wonder about the history of your home and property regardless of how long you have lived there. Researching when the house was built, how the structures evolved over time, and who previously lived there can be not only interesting, but helpful for the long term maintenance of your home. However, researching the history of your home can be difficult due to the complex legal situations that can surround real estate, and because there isn’t a clear linear research path to follow. This guide systematically walks through a few of the most common misconceptions related to house research and what
Read more
More posts